Back to all posts

Is Christianity The White Man's Religion?

Is Christianity The White Man's Religion? Of Course not!!! I've released the new single "White Man’s Religion?" which is the second single for my upcoming album entitled NNSM (New Name Same Mission). “White Man’s Religion?” is a song that debunks the false, but well-known claim that Christianity is a religion that belongs to White (European) people. Many believe that the Christian faith was introduced to black people and other minorities primarily through slavery and colonization. Justin debunks this lie propagated by many black cults and Pan-African religions through biblical, historical and logical argumentation. The fact of the matter is this: Christianity is an Eastern, Asian and African religion from the very first pages of the First Covenant in Genesis to the conclusion in the book of Revelation in the Second Covenant.

Sadly, many people were introduced to an erroneous form of Christianity through the atrocities of slavery and colonization, however Christianity had been in Africa for over 1500 years before the infamous Trans-Atlantic Slave Trade. Jesus; the central figure of the Christian faith actually lived in Africa and the Gospel reached Africa well before it made its way to Europe. This is a work of art that is not meant to promote Black Supremacy, but biblical and historical accuracy. This song cuts deep and is sure to spark conversation as it touches on difficult subjects such as slavery, racism, colonization, black cults, ethnic identity and Christian unity. While many aspects of the subject matter are controversial; it is a necessary conversation to have, nonetheless.

Christianity is a faith for all people and all nations! “For God So Loved the World that he gave his one and only Son so that whoever believes in him would not perish but have everlasting life” John 3:16.

​Shoutout to Levante Ellis @YunenX for designing the artwork for my new song "White Man's Religion?" Yeshua, Jesus the Christ is the most important person to ever exist in all history! Almost every country and culture has depicted their version of Christ and what they feel he looked like.

In the artwork we have different depictions of Christ by different cultures and countries. From left to right we have: Hungarian, Hispanic/Latino, Filipino, Native, (the next two) White/European, Black American, Chinese, Black American a second time, Japanese, another Black representation and finally the standard well known but inaccurate White/European depiction.

What's most important isn't what he looked like but who he was and what he did! He lived a perfect life, died on the Cross and rose again defeating death, hell and the grave​!​ No matter what you think Christ looked like, have you repented and put your trust in him? 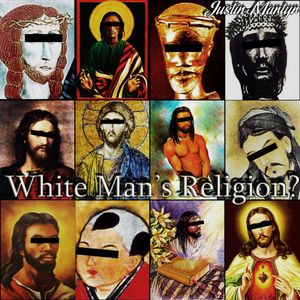